Remote water level monitors from OTT HydroMet are helping engineers to optimise the protection of assets such as bridges during floods.

Engineers at Transport Scotland have investigated the potential for water level monitoring systems to help mitigate risks where transport infrastructure interacts with moving water. The trial was conducted at a bridge over Vales Burn near Hawick in Scotland, and OTT HydroMet’s Wendy Strain says: “We set the monitoring system to deliver alarms at pre-set water levels, which enhanced the timing and efficiency of site inspections.” 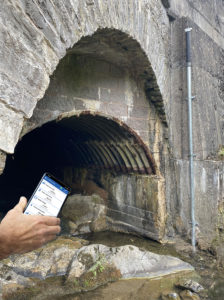 Background
Climate change is increasing the frequency and severity of extreme weather events such as storms and floods. This presents a growing threat to structures that could be susceptible to scour during periods of high water flow. The trial was therefore established to determine whether access to remote water level measurements could enhance the protection of critical transport infrastructure.

The stability and integrity of structures such as bridges, culverts and walls can be compromised by ‘bridge scour’ which is caused by fast-flowing water that removes material from around the footings of bridge abutments or piers.

There are three main types of scour. Local scour is caused by the faster water flow that occurs around piers and abutments. Constriction scour is created by water accelerating through a narrow opening, and degradation scour can lower a river bed over a longer period, both upstream and downstream of a structure.

The effects of bridge scour can be disastrous. For example, during a flood in 1987, the Glanrhyd Bridge in Carmarthenshire partially collapsed, causing a train to plunge into the River Towy, killing the driver and three of the passengers. In 2009, failure of the Malahide Viaduct in Dublin, Ireland was caused by foundation scour. Two commuter trains packed with hundreds of passengers were just seconds away from disaster when a 20-metre section of the viaduct collapsed after they passed over it. Nobody was killed, but travel chaos ensued.

Bridge scour in Scotland
Transport Scotland is split into four operational regions, and Jim Brown is South East Unit Bridge Manager. Prior to this position, Jim spent 42 years as a civil engineer with Network Rail, 13 years of which he headed the geotechnical discipline in Scotland – so it is fair to say that Jim knows a thing or two about bridge scour. “The most important objective is the early detection of increased risk,” Jim explains. “Once we have established which structures are more vulnerable during flooding, we are able to implement different levels of mitigation.

“Much research has been undertaken in an attempt to be able to monitor scour, but this is obviously problematic because potential scour takes place at times when it is not possible to see the river bed and certainly not possible to deploy divers,” Jim adds. “For this reason, the continuous monitoring of water level is not the perfect solution, but may be the best and most practicable.”

Water level is already used as a risk factor by the inspection teams where the 1 in 200 flood level is shown on structures by a fixed marker. However, Transport Scotland have to monitor 700 structures which are over or adjacent to water, and site inspections are costly; both financially and in resources. The inspection system could therefore be more efficient if it could be informed by remotely available water level data, especially if the data enables faster, more efficient implementation of mitigation measures.

If a structure is determined to be high risk, a hydrological assessment is undertaken. This may prompt a requirement for strengthening of the structure itself, as well as measures to protect or fill potential scour zones, and/or to alter water flow and disrupt vortices. In extreme cases, when a potentially vulnerable structure is exposed to high water, it may be necessary to close highways or rail lines until the level of risk can be lowered. 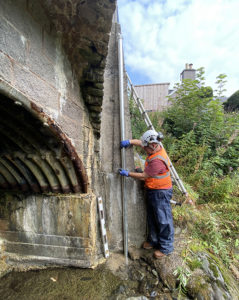 Vales Burn trial
In light of the potential for live water level data to inform the bridge inspection process, OTT HydroMet was invited to propose a monitoring system that could be evaluated at a culvert on the Vales Burn. “Our solution was comprised of an OTT ecoLog 1000 water level logger in a stilling well, with cellular data connection to Hydromet Cloud; a web-enabled platform for processing, displaying and storing hydrometeorological data,” explains Wendy Strain. “Data were set to be transmitted routinely every 6 hours, but two alarm levels were set to prompt SMS alerts, when necessary.”

The monitoring system was installed in September 2021, and Jim Brown says: “The trial is a great success; we utilise the Scottish Environmental Protection Agency (SEPA) flood alert warnings to monitor flooding and it has been our experience that the highest water levels generally occur about one or two days after a storm, so one of the main objectives of the trial was to determine the best time to despatch inspection staff.

“The monitors did issue alerts during the trial, but these were when levels met the lower alarm level, and in these cases, further interventions were not required. With the benefit of water level data, we will therefore be able to optimise the deployment of the inspection teams and mitigate risk,” Jim adds.

Summary
Bridge scour is a long-standing problem for transport infrastructure, so the deployment of remote water level monitors/alarms that can be accessed via PCs or a mobile App offers rail and highway authorities an opportunity to optimise their scour assessment activities, prioritise countermeasures, improve transport resilience and protect safety.

Reflecting on the trial Jim says: “This project has shown that a network of water level monitors could inform bridge engineers of potentially affected structures. I understand that the Hydromet Cloud platform is able to connect with an almost infinite number of water level monitors, so we may be able to roll this out on a larger scale in the future.”